Going Where It's Dark review by Ampster 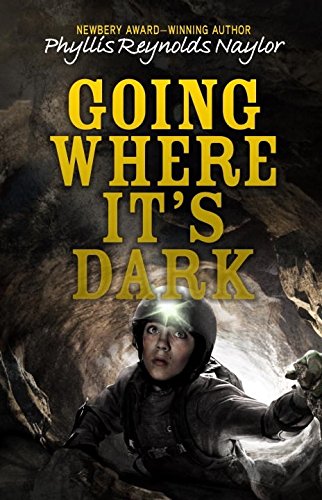 Buck Anderson seems like your typical 13-year-old boy. He likes comic books, helps his dad with cutting down trees for lumber, and does odd jobs for his uncle, including taking care of an old man named Jacob. Buck also rides around on his bike, exploring the outdoors with friends.

There are four major reasons why Buck isn't typical. First, Buck's best friend, David,  moved away, leaving him friendless. Second, Buck is 4'9" and can fit into very small spaces. Third, because Buck can fit in such small spaces, he explores caves. Finally, Buck stutters.

Buck's stuttering is not improving, even though his family is doing everything they can to try and get him to stop. Buck is teased by Pete, or Pukeman, and his gang, called the ducks, because of his speech disability. The grumpy Jacob reveals himself as a speech therapist and starts to work with Buck to improve his speaking in a strange and new way. Buck sadly realizes that exploring caves now would mean forgetting about the first rule in cave exploration: Never go caving alone. When an unexpected happening puts Buck in a deep pit with no way out but to go forward, deeper into the dark, he must put his courage and strength to the test and keep pushing forward in his hope to find the light.

Going Where It's Dark started from the very first chapter as a unique, heartwarming story of overcoming challenges and never giving up. Buck was introduced with such a personality and a desire to fit in that it just about tore my heart out. The book was very well written and really captures detail. I couldn't put this book down! Naylor writes with such care, making it feel like she poured her soul into this book.

My personal favorite character was Nat. Nat is the only boy his age who even talks to Buck once David moves away. Nat has a great sense of humor, and even hangs out with Buck, solving the mystery of the stolen lumber. Nat notices Buck's stuttering, but doesn't really make a big deal about it, unlike Pete. Jacob's personality is one that many people might hate, but deep inside every heart of stone is sadness, and that really makes me think of Jacob in a positive way.

Buck is a strong protagonist with perseverance, and even when he hates himself for his disability, he still finds the courage to smile. What really made this a top book for me, though, was how even though his family pushed him to get rid of his stuttering, Jacob didn't. Jacob told him to embrace his stuttering. If he feels comfortable with who he is, than everyone else can't hurt him by making fun of how he was made. Physical weakness doesn't mean that you were made wrong, it just means that you have to battle harder, and that makes you stronger. I think that is a philosophy everyone should hear and believe.

This book doesn't have any violence except for a few cuts and bruises and other minor injuries from caving.
KEYWORDS