Escape From Aleppo review by Ampster 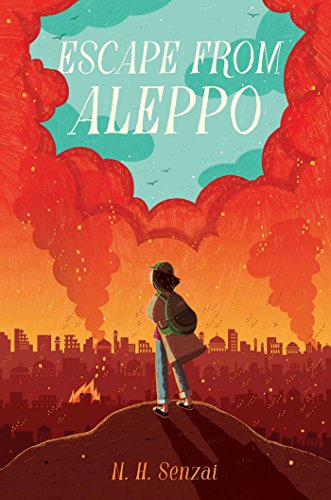 In 2011, there was an outcry from the people of Syria. As the Syrian government and the rebels locked into a dangerous war, the city of Aleppo became the battle grounds, and the citizens became the casualties. For years, Nadia had tried to ignore the signs: the riots, the protests, and even the tension in the very air she breathed. Now, Nadia can no longer ignore them. When the fighting comes to her district, Nadia is forced to flee. Once her apartment building is bombed, Nadia is suddenly separated from her family. She is on her own. She is a refugee. Through the horror of war, Nadia must keep fighting to escape the danger and find her family. She must keep fighting for her life.

Escape from Aleppo was a book that opened my eyes to the horrors of war. It showed me what it truly means to be caught in the crossfire. This book, however, also showed me heart. I saw raw human emotion unlike any I’ve ever seen before in a realistic fiction novel. Nadia was brave, but not because she didn’t show emotion or pain and just rose up from the trial without difficulty. She was brave because she was real. I could connect one hundred percent to Nadia. She was afraid, and that’s what made her human. She didn’t want to leave her home, and that’s what made her brave. She left because she knew it was the only way. Being brave is being ready to face and endure danger or pain and to show courage. When she realized her family was gone, she did not give up. She was scared and confused, but she didn’t stop. She faced the danger and endured the pain of being on her own. She showed true courage, and that’s what made me love this book.

This book has some violence, but there is nothing graphic or offensive.
KEYWORDS