The Diviner review by PhilipDeGroot 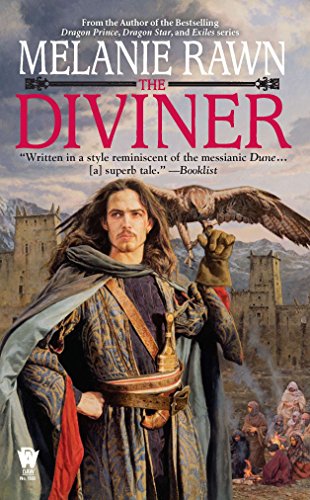 For much of recent history, the al-Ma'aliqs have lived in Dayira Azreyq under the rule of the Sheqas after trading their freedom for protection during time of war. The Sheqas, queens of Rimmal Nadar, however, have always been threatened by the presence of another great family. This precarious peace is broken when Sheqa Nizzira orchestrates the slaughter of the entire al-Ma'aliq family. However, one man, Azzad al-Ma'aliq, survives. To survive, he must run for his life, and for the sake of survival, risks death by hiding in the desert. He is found, near death, by a tribe of healers called the Shagara, where he is welcomed as one of their own. He builds up his reputation and wealth in an attempt to get revenge on the Sheqa, but she will never give up until all the al-Ma'aliqs are dead.

Spanning several generations of al-Ma'aliqs, The Diviner tells of their quest for revenge on those who took everything away from them. Their passion gives them the strength they need to succeed in their quest or die trying.

One of the most interesting characteristics of this book is that it takes place over the lifespan of many different characters. This leads to major events that happen one after another, and kept me turning the pages since there was never a boring period. Since it is a fantasy novel, there is no real development within the world, so it is easy to get a grasp on the setting and understand where everything is taking place, but you have to keep getting to know new characters. This makes it intriguing because you get to join each character on the rollercoaster that is their life, but at the same time, it makes it much harder to connect to the characters, since there is much less time to learn about them.

However, that is the only gripe I had about the story. The plot was rock solid, and kept me entertained. And, like many novels, the world was very well developed and gave the story a sense of reality even though it happened in a different world. Although it was difficult to learn too much about some of the characters, because it spanned many generations of the Shagara, one part I enjoyed was learning about the culture and secrets of the mysterious group of healers. In addition, this information about the Shagara was spread throughout the book, so you kept taking in little pieces.

Overall, I would recommend this to anyone who enjoys epic fantasy, as it is a great example of many of the things that make the genre great. If you don't enjoy this genre, however, there isn't any one amazing characteristic of this book that will make this book stand out for you, and as such will probably be less enjoyable.

There is no explicit adult content, but there are some sections that will be harder to understand or less appealing to younger or less mature readers.
KEYWORDS

Read more reviews by this Litpick Book Reviewer: PhilipDeGroot
Recommend this book and review to your friends on Facebook