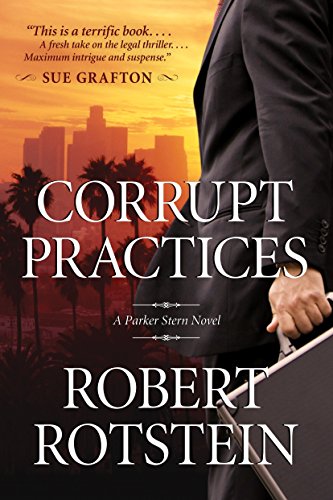 Parker Stern, the main character of Corrupt Practices, begins the book as a formerly successful lawyer who has developed stage fright in the courtroom ever since the head of his law firm committed suicide. This stage fright has destroyed his career as a lawyer, so he takes a job as a law professor in an attempt to get his former life of success back. He is suddenly thrown back into the courtroom when his old friend, Rich Baxter, asks Stern to defend him against the Church of the Sanctified Assembly, a large cult with power stretching far past just their members. When Baxter is found dead in his jail cell in an apparent suicide, Stern begins to become suspicious. At the request of Baxter’s father, Stern takes on the assembly in court to prove that Rich Baxter was murdered by the Assembly. However, by attacking the Assembly, Stern places himself and everyone he loves in danger.

Overall, I enjoyed reading Corrupt Practices. The characters were very unique and intriguing to get to know, but that made them more difficult to relate to. The plot was very well thought through, leaving no plot holes, but at the same time explaining all the events in the book very thoroughly. The book was written in present tense, which made it a little awkward every once in a while, but I stillI didn’t want to put the book down. There were many surprises and twists in the story that I wanted to keep on reading and find out how it ended, which made me largely forget about the sometimes distracting tense. The main problem I found with the book was the frequency of overly sexual descriptions. While I could get past some of the language found in the book, I did not think these pictures were necessary, but rather that they detracted from the overall quality of the book. In conclusion, for a mature reader, this book is a suspenseful legal thriller unlike anything I have ever read, and I would definitely recommend it. Unfortunately, for a younger or less mature reader, the language and inappropriate scenes make it a no-go.

There were a couple of sexual scenes and descriptions that less mature and younger readers should not be reading. There were also swear words scattered throughout the book. I would recommend that a parent read the book before allowing their child to read it.
KEYWORDS


Read more reviews by this Litpick Book Reviewer: PhilipDeGroot
Recommend this book and review to your friends on Facebook