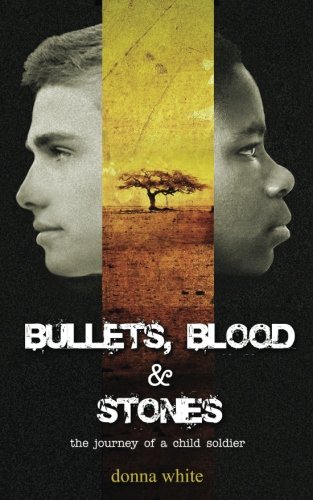 This story follows the life of Scott, a fifteen-year-old archeologist who’s always loved going on expeditions with his father, Dr. Romo. On Scott and Dr. Romo’s most recent expedition, Scott unearths a bag of magic stones in the cave systems of Uganda, Africa. From the first moment he touches the stones, he’s certain that they’re unique – they give him visions of smoke and fires blazing across a countryside, of women and children screaming, of war and bloodshed before his very eyes.

With the political difficulties of the third-world Africa, the hallucinations are a little too real for Scott’s taste. They hit too close to home, what with a madman on the loose in Africa. Kony, as he’s known by the locals, has been taking children and brainwashing them into becoming child soldiers. Without knowing all of the particulars of the situation at hand, Scott makes a hasty decision: he hides the stones from his father, keeping them a secret.

When he gets back home and attends school, his jacket is mysteriously stolen. Bruce, the school bully, snatched it from an unsuspecting Scott…and in the pocket of the jacket rests the bag of stones. The stones hold a secret which will one day haunt both Scott and Bruce’s very souls and place them in a life-and-death encounter they’ll never forget.

I loved how each chapter started off with a proverb, saying, or quote of some sort. It helped set the tone for the novel and also impacted how the reader understood the upcoming chapter. Each proverb, saying, and quote was lovely and helped me connect with the story in a meaningful way. Having each chapter start off in this way helped to propel the plot forward and also acted as a forewarning to the reader of what was to come in the following pages.

At times, this book was hard for me to get through, and I’m twenty-two years old and am fairly well-read. I have read a variety of materials ranging from children’s novels to very adult materials. What made this story difficult to get through was its accuracy – I knew from the get-go that the instances mentioned in the story were true, and thus the topics mentioned in this story hit me harder than they would have in a fictional tale. However, I am pleased I got through this novel. While it has its gore-filled and violent parts, ultimately, I enjoyed the tale presented within its pages.

The writing style of this story was interesting. The descriptors of the surroundings and the environments were on-point. Rich and expressive, they were expertly crafted and helped me to understand precisely where our characters were located and what was going on around them. They were excellent and greatly appreciated on my part. I was able to visualize and see with blinding clarity where everything was taking place. It was so realistic I felt as if I were right there, alongside the characters, taking in the spectacles before me.

The characterization was good. While, at first, it seemed difficult to connect with any character, after the first few chapters I found myself able to connect with a few. These connections grew over the course of the novel, until I truly could envision the characters with ease. I found most of them rational and realistic, and thus to my liking. I felt empathy, sorrow, and distaste for certain characters, whereas for others I cheered on their significant winnings throughout the battles outlined in the novel. Both the positive and negative roles of the main protagonists and antagonist were very well-written. I loved how the author chose to make each character, no matter his or her role in the story, important and three-dimensional, making them believable and understandable to me. I appreciated how each character had his or her flaws. No character was written to be perfect – each had downfalls, but on the flip side, each also had positive qualities about him or her. The addition of both good aspects and bad aspects to each and every character helped to positively impact the story and also helped me as a reader connect with nearly every character in this book in some way, shape, or form.

One of the lines in the Acknowledgements section that the author included at the end of this novel so perfectly summed up the reason for this series’ existence that I felt the need to quote it here: “And lastly, to the grade eight girl who told me she hated me for showing her a world so cruel and horrid. You proved that my book is fulfilling its purpose: see the world, don’t live in a bubble, and when you see injustices in it, don’t sit on your butt. Do something about it.” If I were to sum up the point of this novel and what I gained from it, I could not have said it in a better way myself.

Overall, I truly enjoyed this great story. The aspect of this story being based on true events really made the world the author created come to life for me and helped me connect with both the characters and the topics discussed in this novel. I truly loved reading this novel and look forward to future installments in the series.

Serious topics such as children fighting for survival in Africa, extreme poverty, third-world lifestyles, AIDS, rape, child rape, death, domestic violence, emotional abuse, verbal abuse, physical abuse, marital problems, mixed families, marriage and divorce, dysfunctional families, cheating, lying, stealing, life-and-death situations, warfare, bloodshed, murder, slavery, violence, gun violence, military violence, and blood and gore are clearly prevalent in the book. While at first these topics are merely touched upon, as the novel progresses we see more and more of these topics coming up and experience plenty ourselves alongside our main characters. There are a few gore-filled scenes. Mystical, spiritual, and religious ideas are heavily seen in the book due to the spiritual aspect of the African people and the magic stones that are a clear and present part of the storyline. Witchcraft is mentioned a few times in regard to Kony and the beliefs he pushes upon the child soldiers under his watchful eye. Cultic practices are clearly seen in this novel, mainly in regards to Kony’s brainwashed army of children. Drugs are occasionally mentioned, but while present in this book, are not a main part of the novel. Profanity is uttered. Parents/parental guardians, teachers, and/or librarians should definitely look this book over before giving it to a child/student, particularly if the child/student is sensitive to any of the previously-mentioned topics.
KEYWORDS