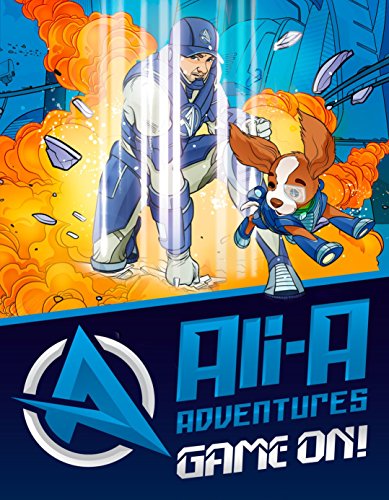 Ali-A, a popular YouTube gamer, is getting ready to go to one of the largest events of his life: the launch of a new videogame called “Alien Liberator 2.”  He’s been given the task of interviewing Mr. Brook Masters, the man who voices the main character in the game.  He’s thrilled to be hanging out at the launch with his girlfriend Clare and their adorable Cavalier King Charles Spaniel, Eevee.  Ali rushes up onto the stage to interview Mr. Brook Masters, leaving Clare and Eevee in the audience.  Everything goes fairly okay until the audience is suddenly transformed into green, weak, and tiny aliens and the plastic prop statues of the invader robots from the game come to life!  The only ones unaffected by the sudden change are Ali, Clare, and Eevee, and now, Ali is stuck in a massive pickle – save his girlfriend and their dog, or save the world?  The choice is his to make.

Having never heard of Ali-A, I didn’t know what to expect from this novel.  I love YouTube and am quite familiar with certain gamers such as Markiplier, Jacksepticeye, and CrankGameplays.  However, I’d never even known of Ali-A’s existence before picking up this book.  To get a feel for the guy, I watched bits and pieces of videos about him, Clare, and Eevee so as to get a better idea of what this novel would be about.  Then, I began reading.

Even without an extensive knowledge about the main characters of the novel, I was quickly able to deduce the specifics.  Ali’s a typical gamer who loves puns, Clare is a sweet loveable protector of the weak, and Eevee is a logical-minded dog who just so happens to talk in the comic.  The characterization was easy to pick up, even with my very limited knowledge pertaining to the main characters.  The characterization was good, as once I got used to knowing what to expect from the characters, they never strayed in that the way that they acted and the things that they did were logical and understandable and as realistic as was to be expected.

The plotline is full of fantastical happenings with a few comedic bits interspersed throughout.  The silly, fun storyline brings joy and some slight suspense to the reader, who is thrust into a fast-paced plot that never stops to ask if what it is doing is right, and only does what it wishes to do.  The plot wasn’t logical, per-say, but the point of the novel wasn’t to be logical: it was to throw the reader into a life where videogame dynamics are the law of the land, where respawning is totally a-okay, and where dogs can talk and give advice to the gamer as he or she weaves in and out of a fantastical world of mystery and sudden death.

I did not expect to enjoy this novel.  When I first got started with it, I wasn’t invested in it at all…but that quickly changed when the main characters were put into rather perilous situations.  I found empathy for them and was whisked away into a fantastical land of talking trees and massacring robots and wimpy little aliens who had no sense of self-esteem or respect for their fellow man.  A good story for anyone of any age, this graphic novel was a delightful surprise for me.  Filled with beautiful art in color schemes including every color and shade of the rainbow, lovely one-liners that made me laugh, pun-tastic jokes, a fast-moving plot, and interesting and compelling characters, this book has it all.  I loved this story through and through, and count it as a wholesome book I will gladly add to my library of children’s novels.

There’s very little offensive material in this children’s graphic novel. The dialogue is perfectly written for younger readers who are familiar with gaming terminology – no cursing or foul language can be found within the pages of this book. While some scenes include some brief violence and threats of imminent death, all of the situations are handled in such a way as to practically eliminate blood and gore. This comic is more cute and adorable than anything, but it also contains action and adventure elements as well. Everything is handled in a child-friendly way, so this comic is certainly suitable for readers of practically any age.
KEYWORDS