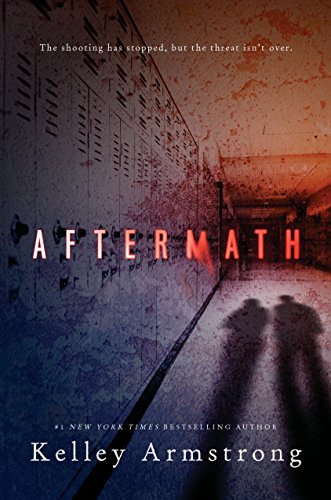 Aftermath
by Kelley Armstrong
Age Range - 12 and up
Genre - Fiction

Skye Gilchrist lost her brother in a school shooting three years ago. He wasn’t a victim; he was a shooter. After the shooting, Skye moved away, but now it is time for her to face the people who hate her the most. Including her middle school best friend and crush, Jesse, who also lost his brother in the shooting… but Jesse’s brother WAS a victim. Jesse and Skye meet up again at school, but they can’t escape the past. Skye is trapped in what her brother did, and that is all people see her as. When Skye finds evidence that might prove her brother's innocence, Jesse and her set out to uncover the truth of that day. What price are they willing to pay, and who are they willing to hurt?

This book was amazing. The twists and turns were super unexpected. This book never failed to keep me interested. I felt like I was reading a 100 mph with how much I wanted to know what happened next. There were so many action-packed moments that I wondered how the author could top them with the climax! But let me tell you, she did. The ending was fantastic. I really loved this book, and I wish I could give it more than five stars. It really showed me the struggles that many families go through after losing someone in something horrible like school shootings. The characters of this book surprised me a lot more often than I thought they would. Kelley Armstrong made one character in particular unable to read because of how much she changes throughout the book. I like when this happens in books because you can’t quite tell how they are going to turn up in the ending.

This book has gun violence in it.
KEYWORDS